Those 10 minutes… Story of my operation 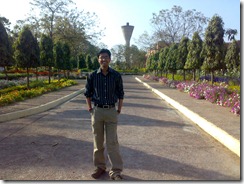 After getting 2 minor, 1 major and 1 fatal stomach pains, I finally came to know the root cause of my frequent occurrence of such stomach pains accompanied with serious vomiting. So, going back to the first attack which I can now say as the first appendicitis attack I got was back in the October of 2008,  the second attack I got was in this January, nearly after 2 years, but both this attack were minor one’s and with home based medicinal help( every Indian home boost about the wealth of traditional medicine Turmeric )I was back on my feet.
This April again I had a severe pain in my stomach and this time around it was not so simple. It was accompanied with severe vomiting and no medicines were able to curb the pain. In fact, after taking the medicines I used to vomit it, so now my body was not accepting the medicinal help. Also, I wasn’t this time in my home, I was back in my college. To stop the pain and the vomiting, doctors  gave me 3 injections in a matter of seconds. And finally within 5 minutes of having 3 doses of injections my pain got vanished.
But it got vanished to finally resurface just after a month on the 6th of May. Meanwhile, after every occurrence of stomach pain I used to consult the doctor but he used to term it as simple stomach pain. After the April episode my doctor finally asked me to get an ultrasound done. I did what I was asked to do but the report showed no signs of worry. Doctor then advised me to get an ultrasound done within 18 hours of getting the pain.
I remember it was Sunday at 6th May when i got my last attack. I asked the warden to get me treated as soon as possible and being  thorough gentleman he wasted no time in provided me a first-aid.I told him that my doctor asked me to get an ultrasound done within 18 hr’s of the pain. He along with my roommate Deepesh took me to Ropar for the medical test.

Second half of the story…
Ropar till Sri Vivekananda Polyclinic, Lucknow
soon to be published here.