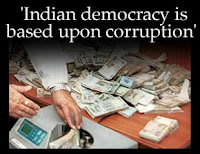 Over the last few months the word Corruption is been consistently in the news. The word baffled me enough to look for its actual meaning. And, I must say that no other site would quench your thirst better then the Wikipedia.
We must comprehend our-self with few basic things before showing our support for mass movements like the one we witnessed last week. Never get carry away with such movements. We should bind this in our mind that wiping out an evil like corruption will take years. Yet, movements against social evils like corruption acts as an igniter and more of a catalyst to start a process which will definitely yield an output in the long run.
Wikipedia informed me that corruption is of several types; it may be a political, social, police, spiritual, corporate, linguistic, etc. More of I came to know that the most common type of corruption is Political. And, in a democratic country like ours the political corruption is the root cause of all other corruption. So if we truly want to throw off corruption from our country than we must strive hard to bring a political change.
Sometimes, I get tormented by an illogical reasoning that corruption follows a lower order hierarchy i.e. from bottom to top. Such type of baseless thinking is totally inane. A middle class person never gives bribe to an official willingly. He succumbs to the pressure and compromises with the corrupt system. Even, the official taking bribe is under constant pressure to supply funds to his senior. And, this cycle continues to only end after reaching a minister. That means for eradicating corruption we must eradicate corrupt ministers as he/she is the only person who favors corruption willingly.
Voting alone has the power of bringing a positive change in the democracy. We must thank our constitution makers who bestowed us with this precious gift. But, every boon comes with an equal responsibility. If we don’t vote than we lose our moral right of speaking against the government.
I found a two-fold use of voting when I came to know about several districts in moist affected areas where people boycotted the last general elections. We must declare that if in 5 years time the ruling political party fails to live onto the people expectations or the promises which they did before coming into power remains unfulfilled than there will be a country wide boycott of the general elections.
Another way is to crisp up the things. We must force the government in bringing out a law that will accuse the major political party running the government of carelessness if any during the 5 year tenure which will further result in cancellation of nomination paper of the MP’s of the concerned party in the next general elections.
Next Part will throw more insight on the topic Corruption. Click here to read it