Everything or Nothing is the tag line of Roadies 9, truly depicting the ambiance at Indradhanush Auditorium, the venue for the Roadies 9 Chandigarh audition. People from all walks of life crowded in to get selected for the most popular youth based reality television series. Roadies series have always lived unto its image of being rowdy and dusty with sharp and ravishing twists and turns where participants compete with each other in some of the annoying, embarrassing and weirdest tasks.

when you want something vigorously; the entire universe conspires in helping you to achieve it

Paulo Coelho once quoted that when you want something vigorously; the entire universe conspires in helping you to achieve it. Till 8th October these lines were just like any other thoughtful words, better only to be read and left behind. But then I experienced the same on my way to the Roadies 9 audition venue. Being nocturnal caused me dearly as I wake just an hour before I was asked to officially report at the venue. Brushing aside any negative vibes I rushed fast so as to compensate for the delay. But then, in the path of joy and me lies the ignorance of bus drivers who took mine waving hand as an act of surrender before their supreme power.

Tension creeping with no other way around me saw a messiah in the face of a young gentleman in his early twenties ridding the Royal Enfield. Finally, for the last time with full vigour I waved my hands asking for a hitchhike. This time God was all with me, gentleman heart resonated with mine, his legs pushing the metallic brakes making his big powerful black sparkling giant to stop at once. The journey which could have taken almost half an hour took merely 20 minutes. 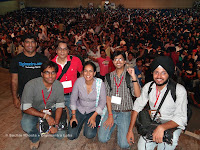 Gayatri, a young beautiful charming lady, working with the MTV India who called me a day before disclosing the news of me getting selected as one of the few bloggers to unleash the backstage hidden secrets of Roadies escorted me to the scintillating podium, on the way handing me a placard with press written in bold letters. Yeah! You read it right, a press card. The auditorium was jammed packed buzzing and sizzling with wannabe roadies. A crew member told me that people have been flocking at the gates of the auditorium since last night, chanting Roadies anthem and shouting slogans. 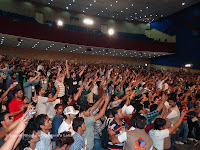 A beautiful model set the mood high with her blazing anchoring. Soon ex-roadies Bani, Anamika, Mohit and Suchit came in to spur up the mood and in no time whatsoever the auditorium was wobbling with enchanted spirits. Then came up the announcement of the 3R’s coming in which rocked the auditorium like never before; Raghu, Rajeev & Rannvijay were all there with people shouting, dancing and doing it all to show their love, affection and above all passion for the glorious reality television series. Nagesh Kukunoor surprised all with his being there to promote his latest flick starring Rannvijay. 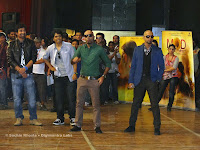 Rannvijay directing all the participants strictly to use only Hindi as the medium of expression in the group discussion touched my heart, even somewhere in the country Hindi is given its due status. Time and again Raghu & Rajeev asked the participants not to wear any masks and conceive their true identity as befooling them wasn’t easy and the repercussions would be tormenting.

Meanwhile our joy spells no bound when we received news of interviewing the ex-roadies. I must confess this that even after being a Roadie Anamika hasn’t lost her perkiness. Ex-roadies narrated their eventful Roadie journey and life after that; they told us that Roadies unlike other reality shows isn’t scripted. They cherished each and every moment of the journey. 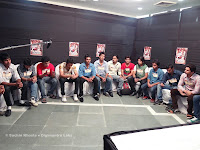 The group discussion rounds began soon after and we bloggers were given exclusive permission to be a part of it. It was overwhelming to see the MTV moderator setting the pace of the GD’s with participants doing their bit to outcast each other and MTV crew recording each and every intense moment. The interview with one of the moderator threw light on the essence of Roadies. It’s not always about aptitude but all about attitude which decides a participant altitude.

nothing can trample hard work and strong will 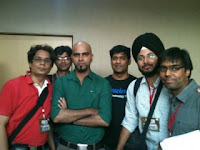 Best things often happen late and so was the case here as our restless soul waiting to meet Raghu & Rajeev was given solace when Gayatri took us to their room. The twin stalwart narrated their Roadies journey from the very first series till the present one. They told us that nothing can trample hard work and strong will. It was great to see the youth icons full of humility and modesty. I found the mainstream media falsely distorting the image of Raghu Ram and Rajeev Lakshman.

As a token of appreciation bloggers were given goodies from the crew of Roadies 9; thank you MTV India & BlogAdda for bestowing upon us a memorable moment to cherish for long.
Posted by Rachit at 7:49 PM