T&P cell coordinators for EIE told us, the 3rd year students, that the very next day Indian Army would be conducting a job fair in Indo Global Group of Colleges and would be recruiting students under the University Grant Scheme. I was in two state of mind then, firstly being a senior-most T&P cell coordinator from EIE I wasn't aware of this important notice. And, secondly should I go for the job fair? Well, I got the answer to mine first question very soon after meeting Madam Suman, T&P cell teacher in-charge for EIE. She said that she had sent me a message, which never reached me though, and was waiting for mine reply. In the meantime 2nd year student came to her and she eventually gave them the charge. 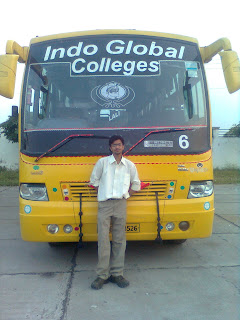 The next lecture was the library, a free class, and so along with few of mine classmates I went to Nescafe for some refreshment. I met Atul there and we discussed about the job fair at Indo Global. He was carrying the copy of the actual notification sent by the IGC to our college. After reading the whole notification I came to know that the entry to job fair is only by invitation and 8 colleges of PTU including our's have been invited. We group of friends made up our mind to sit for our first job fair.

The next task was to gather the transport information... that whether our college would be sending there buses to IGC for the job fair or not? As always the answer was in negation. I went to our T&P cell second in command and verified the same but he only gave me the same old reply,"Rachit, I am sorry.. college can't provide students buses for the next day job fair". He asked me to personally meet principal and convey him the student plea. I went to principal office, only to be stopped by his PA. This man has a strange character... he think himself as the principal and not his PA and try to solve all the matter brought for principal guidance. As his behavior is, he jumped into the scene to grab the limelight. He told me that princi is quite busy and would not be able to meet me for an hour. I saw mine watch...it was 3.30pm at that time and after an hour college would have got over and then meeting the princi would not have served any purpose. I told the PA not to talk like an idiot and allow me to meet princi..only to evoke his until now hidden ego. I wasted mine 15 minutes arguing with him but in vain. I drop the idea of asking the college authorities for providing the students the necessary transport facility for the job fair.

Now, mine next task was to get the IA application form attached by student section. Without wasting time I went to mine HOD office. EIE HOD is a true gentleman, he is always there to help his department students. I got the printout of the form from his office. I went straight to the SS only to see crowd of students already present there to get there form attached. A fellow student told me the exact procedure..it was more or less similar to what I have listen for government offices...it was a three step procedure....firstly the form would be signed by the SS dean.. then the signed forms would be sent to princi office for his signature.. after that the photocopy of the forms would be taken and then finally we students would be given back our forms. The whole procedure would be taking around an hour. And I was not having that much of time. I went to a known employee and asked him for his favor. He asked me to wait for 5 minutes and after that gave me mine college file, which I would be needing up for filling the form. He also carried personally mine file along with the form to SS dean and then to princi office for there instant signature.


Part 2 of the post to be published tomorrow
Posted by Rachit at 6:40 AM