Last week, I celebrated Diwali and performed the Chhat puja with pomp and show then the previous years.

But, festivals have changed now.. 10 years back when I used to be a small kid, we had two types of festivals in India.. one with pan India presence like the Diwali and Holi and other with limited presence like Chhat puja, Lohri and Onam. 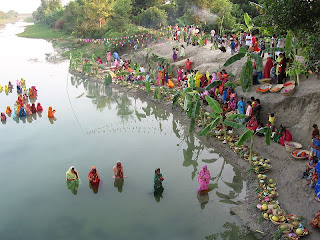 That was something ten years back; Liberalization of economy in the early 90's brought big MNC's into the Indian market. Advertisement became the need of the day. Manufacturers started luring the customers with added gifts. Diwali, Holi and Christmas Dhamaka became common marketing ideology.

Competition increased manifold with each festivals and so do the reduction in MRP of products during festi occasions. Then, the companies took the smarter step, sensing the market demand. They globalized the second type of festivals. This brought in narrowing of the line between the two types of Indian festivals.

Even the government sensed the change in thinking and declared a holiday for Onam in the state of UP, far away from the place of it'sactual evolution.

How globalization brought up this change?

Hindi speaking heartland missed the aftermath effects of liberalization of economy. Whereas many new industries and ventures came into existence in other states post liberalization. More and more people were now required to work in this industries and so skilled labor from Hindi heartland migrated to other states in search of jobs. Other state people welcomed them with open heart..  as they brought in prosperity. But, they also took there tradition with them. As the time passed there population in other states rose. They started contesting in local elections and took active part in local activities. And, this is the reason why now Chhat puja is celebrated in Kerala.

Market analyzers sensed this change and started marketing type two festivals on the same pattern as of festivals with pan India presence.

You may also like : Kadzilla's Lounge
Image Source: Google