Friends I'm sorry about the delay.. I wrote on Part 1 of this blog that I'll be posting second part the very next day but believe me I wrote the post the very next day.. the late is only due to no internet access as I was traveling around. Hope you liked mine First Job Interview. Your valuable comments are always needed.

IGC is located on the foothills of Shivalik mountains. Narrow roads and developed villages(Punjab story) on our way led us to IGC and as soon as I reach IGC mine cell phone ranged.. a message got displayed.. Welcome to Vodafone Himachal Pradesh. No no no... I wasn't in HP physically.. I was in Punjab.. IGC is in SAS Nagar, Mohali. But, Mine Docomo signaled changed to Vodafone and I was set as customer in roaming. We went straight towards the registration center and got our self registered. A point to make here, IGC administration is far more better then that of IETB( mine college). Office bearers there were very much committed towards their work. A simple work.. attachment of form.. which took me 1 hour the previous day was being done in just 5 minutes in IGC. This was the sense of commitment lacking in IETB. 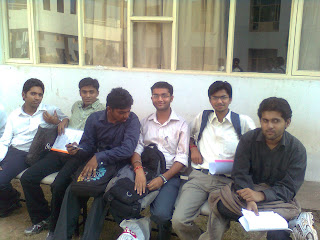 We were told that our turn would probably take another hour so we thought of utilizing it much and went for some sightseeing around the college. IGC is much smaller then mine college but has beautiful architectural design. Also, the scenic Shivalik hills around the college added to the abvience. We met other students from various other colleges and shared our opinion. But one question was universally talked about in each and every conversation I went through.. "What are the questions interviewer is asking"? On every student face a sense of suspense added with curiosity and enthusiasm can be easily seen.

"Is your name Rachit"... a volunteer asked me.
"Yeah.. Rachit Sharma from IET Bhaddal"... I replied.
"Sir, your turn now"

This was the time I was waiting for, mine first job interview.

"Good afternoon sir".. I said while standing at the threshold.
"Good afternoon gentleman.. come in.. have a seat".. the interviewer replied.
He then asked me some general question regarding me, mine hobbies and mine beliefs particularly about mine knowledge of the Kashmir issue. This was a blessing in disguise, this is mine favorite topic.. the history and politics of India. I told him each and every minute detail about the Kashmir issue. Mine interview took almost 8 to 10 minutes after which he shake his hand and said "It was nice talking with you".

Mine interview was over now.. later on through the IGC website I got the info that I wasn't selected for the next round. This for a while got me depressed and upset but then as usual I got it over. Many new things I came to learn about life. Each and every student present there was full of dreams. All were there to out-due the other.. which included there friends too. I was full of mixed feeling. I never thought in mine life that a army major will ever say.. nice talking with.. I will never be able to know the exact reason why I wasn't selected but more then that I learned the law of selling oneself.. which people call Job Interview.