Subhas Chandra Bose and many others were adamantly opposed to a standing army. Army’s not only eats away the countries money but also takes its blood. And it just keeps getting worse, politician may say that armed personal are there to defend our freedom but in reality they are fighting and dying to make the rich richer and create endless new enemies for the state. 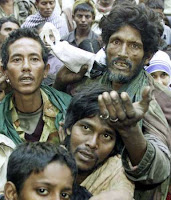 How can any government justify spending 2.8% of countries GDP on defense related purpose when still after 62 years of Independence we are looked down as a poor country? We have people been starving for millions of years and instead of giving them a better future our country spends billions for becoming a super power and competing in a mad race of power, fame and money.

Why don’t we declare India an international country? Isn’t it wise to drop the boundaries, all passport limitation and disbanding the army? India should declare that it is no longer a nation, that it belongs to the whole world. We truly know the fact that wining a war against China, Russia or America is out of the cards for us. As a matter of fact China already occupies thousands of miles of our land and India has not even the guts to ask them for the speedy return of that land.

So when we cannot win the conventional war why not take some other course? We should declare that from henceforth we won’t be maintaining any army, will be sending all the troops to fields or factories and for doing public good. We have been attacked in our past, so our arms and armies don't help.

People will argue that in such a situation India will become an easy target for anyone to attack but even now we live in such a hostile environment where anybody can attack us—what difference does it make? Even the biggest powers have been attacked. We have seen powerful and mighty nations like Germany and Japan being defeated.

In fact, then to attack India will become extremely difficult because there will be a worldwide condemnation. A country, who declares itself defenseless, drops its arms and goes to the fields and the factories, welcomes everybody who wants to come, to invest and to bring industries. It will be almost impossible for anybody to attack India because the whole world will be against that attacker.

We will garnish so much sympathy and support worldwide that no country will dare to harm us.


For real news that matters visit N2MN, click here.
Posted by Rachit at 3:16 AM